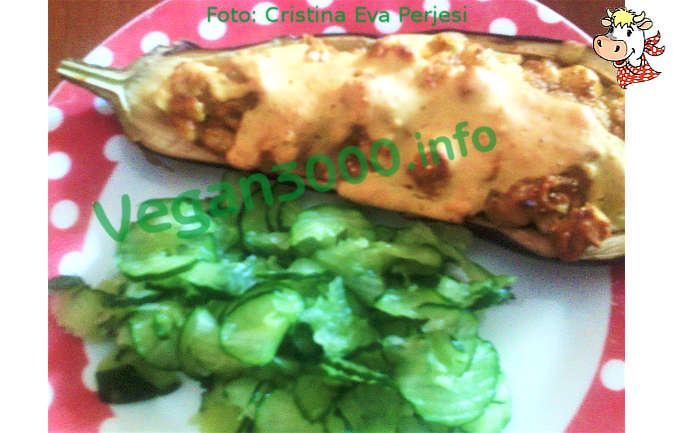 a few drops of vegetable cream

I know, it's hot, and turn the oven on isn't so great, but for these eggplants I would say we can make a sacrifice.

First I cut the eggplant in half lengthwise, leaving even the petiole, then I empty the two halves, salt and settle on a cutting board so they lose water.

I mince the meat extracted and brown it in a pan for a few minutes, then I add finely chopped olives.

Meanwhile, in a glass, I mix a tablespoon of tomato paste in about 100 ml of hot water and I add olive with eggplant.

Once evaporated the water, I pour the compound into the blender, I add a few drops of vegetable cream and yeast flakes and blend until creamy.

I bake the 100 g of small pasta and then I pour it into a pan along with the eggplant.

I warm up mixing thoroughly.

Once cooled the mixture, I take the two halves, after having rinsed them from the excess salt, and I fill the eggplant with pasta.

I bake at 200 degrees until the chickpea cream is cooked.

I added no salt since the eggplant and olives were already salted.

Thanks to Cristina Eva Perjesi

Croutons with cannellini beans and mushrooms

Mediterranean salad
Have you read these news?